So there I was on the morning of the 20th of Feb 2018, officially the first day on the new job so to speak of senior pastor.

First let me say that it is an honour and a privilege to take over from Gavin and the 27 year legacy that is Waratah Church that began from basically nothing. We have a lot to thank God for. A lot that we could just be satisfied with. (More on that later.)

I realised all over again that everyday is a gift that God gives us to give to others. The problem was, I didn’t really know how to start.

You see we have a staff meeting at the ‘beginning’ of the week and here am I with no clue what to say to our staff team for my first staff meeting ‘in the chair’ as it were. But as usual, the Lord provides. Moreover, he usually does so in the mornings when I am having my devotional time in my armchair. It is here that I have learnt the most important leadership lesson of all: Spiritual discernment trumps strategic thinking.

Anyway, on this particular morning I came across a reflection I wrote last year on a particularly shaping experience I had around 10 years ago.

It happened at a place called New Norcia, which is a town in Western Australia, 132 km North of Perth, near the Great Northern Highway. It is situated next to the banks of the Moore River. Google map it and you’ll soon see that as well as this, it was essentially built by Benedictine monks and remains a monastic community to this day.

So there I was, a theological student in his early 20’s determined to ‘get serious with God’, whatever that means and take myself on a 3 day solitude and silence spiritual retreat. I’m going to pause for a moment here and apologise to you if you’re one of the many currently choking on your tea and biscuit right now at the thought of me not saying a word for three whole days.

Anyway, now that we’ve gathered ourselves, one of the cool things about New Norcia is it’s rich history and amazing little ‘discoveries’ hidden around the town for those who bother to take the time to look. One of these little discoveries is the ‘faith bridge’ down by the river. As you can see from side-view in the pictures below, it’s a bit like a river ford, but with block like thingys that protrude out of the water. It is possible to cross the river without getting your feet wet, IF you jump from block to block. That might sound easy, but they’re spaced just far enough apart for it to be a bit risky, especially when you see the moss and lichen growing on the damp, dew covered concrete. You realise that if you do stack it, you’re out there on your own and kilometres from the monastery. But there you go, the only way to get to the other side….is to take a leap of faith.

I’m going to cut a long story short and admit that it took 4, yes 4 individual attempts (as in, walks out to the site) for me to finally muster up the courage to jump to the first block. I was disgusted at my cowardice that for at least three times, I had spent over 45 minutes staring at the challenge before me unable to move. That’s wounding your pride when you’re young, fit and 6 foot 3.

But then, angry at myself…I jumped. Refer to my finest art below to summarise what happened next: 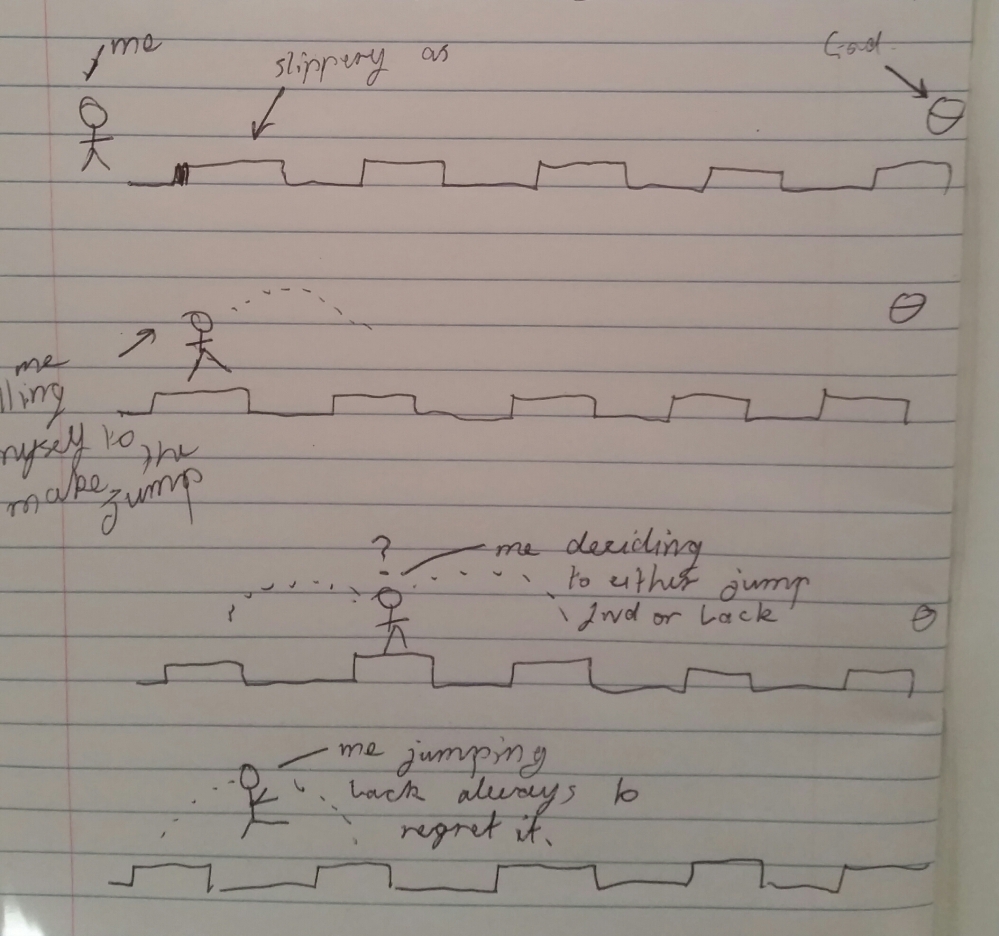 As you can see, I jumped…..to the first block. But then I faced the choice to keep going or self-preservation.

I decided to jump back. Here’s the reasoning: “Well I’ve proved to myself I can do it now, so there’s no use risking injury to do the same thing multiple times.”

I have regretted that choice ever since.

So much so, that one day before I get much older, I want to go back there and jump all the way across. You may notice that without thinking, I drew God represented on the other side. Of course there was no ‘burning bush’ on the other side but what I’m portraying is my spiritual memory of the experience and hence the lesson that I believe God taught me.

I believe the only way to live with your regrets is to see them as the deepest of all lessons. Ever since that day, I swore to myself that never again, when faced with another ‘faith bridge’ be it an actual physical one or a spiritual one, even just another ‘block to jump to’ never ever again would I jump backwards in self-preservation.

That is the lesson I shared on my first day as Senior Pastor of Waratah with our staff team. We were able to discuss honestly what our individual ‘blocks to jump’ were and how we did/were going to conquer them. Then we talked about Waratah as a Church and some of the major blocks that we have to jump as a community. Finally we talked about the importance of patience and listening to our the people of our flock, especially when they are angry or upset about an area of change because folks, we’re all struggling to jump over the next block in our hearts.

Whatever it is, we’re not on the ‘other side’ yet. We all have blocks to jump. As individuals, as churches, the last thing I want to be filled with standing in front of Jesus is regret. Regret that I missed out on the best he had for us because we were too busy with self-preservation.

I want Waratah to not have regrets, especially linked to ‘resting on our laurels’. I want us to be a ‘block jumping’ church.

What are the blocks that you need to jump? That person you’re avoiding? That vice you can’t quite give up? The preference for time wasted over time with God?

It’s the only way to the other side.